Rippa Dorii is an Ontañón Familia project based on the wine-growing areas that separates but unites the Duero River.

has been synonymous with
wine since ancient times

But the history had started way before that. For a long time Rueda, like much of Castile, remained on the vague and changing border between Christian Spain and Moorish Spain. In fact, the city of Rueda was devastated on several occasions and remained in no-man’s land until it was reconquered by King Alfonso VI (1040-1109), who encouraged cultivation of the vine, giving lands to anyone who wanted to plant vineyards. The vine makes man put down roots so its cultivation in turn roots men in a particular territory.

But at that time nobody spoke about the wines of Rueda, but rather the wines of Medina del Campo (the great commercial and financial centre of the era), which was also the place of residence of the Catholic Monarchs until the death of Queen Isabella. References and accounts mentioning the wines of Madrigal de las Altas Torres and the wines of Alaejos have also been found. Those wines made from the zone’s autochthonous verdejo variety which had high alcoholic strength and long oxidative ageing by the ‘asoleo’ method of leaving the grapes in the sun.

In the court of Philip II at Valladolid wines from the Tierra de Medina were already being served and the king even pronounced a decree to prevent any kind of fraud with his favourite wines. At the beginning of the 17th century over four hundred wine cellars were registered in Medina and curiously Verdejo was very famous because of its long cask ageing, as was quoted in a text from the time dated 1606, referring to a barrel that belonged to a banker named Simón Ruiz, which asserted that he was keeping wine which was over twenty years’ old.

The first setback for the wines of the Medina region was when the Court moved to Madrid, leading to a decline and an increase in wines which were more suited to transporting to the new capital, since they had to cross the Guadarrama mountain pass which could be blocked for months in winter. This meant that the wine from the Tierra de Medina zone had to look for a new market. This turned out to be the north of Spain, mainly Asturias, León, Cantabria and the Basque Country. The decline of the fairs in Medina was the key to the transfer of winemaking to nearby localities, as in the case of La Seca and La Nava.

The food shortages during the post-war years promoted the defence of grain production, with the creation of the National Wheat Service which guaranteed good prices to the farmers, leading to the uprooting of vines to sow cereals and pulses, which were in high demand from the Spanish population in times of great scarcity and food shortages.

Once phylloxera had passed the Rueda region, new vines were planted with priority given to the Palomino Fino grape, originally from Jerez, which had higher yields and was highly valued for making aged wines. However, in the Rueda area the Palomino did not produce such good rancid wines as was hoped and, with Jerez producing better quality wines from the same grape, the Rueda district which had been thriving just a few years before, fell into decline.

At that time, in the first half of the 20th century, the area planted with vines fell to 13, 637 hectares. Growers were blinded by the high yields that Palomino gave them, but the wines were of poor quality and were nothing like the wines of Jerez and Montilla. They kept on producing wines with oxidative ageing using the verdejo variety, but it reached a point of stalemate, made worse by the outbreak of the Spanish Civil War. 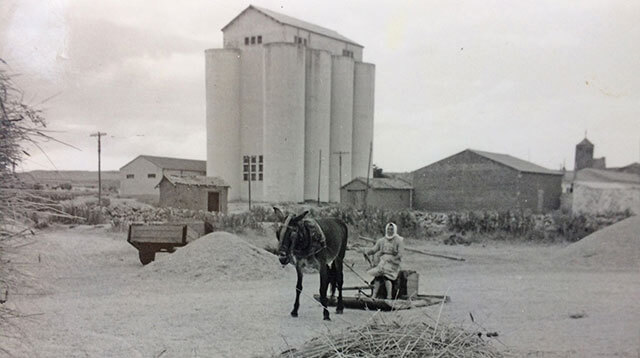 The Verdejo grape variety is one of the best white grape varieties in Spain. Found almost exclusively in the Rueda appellation, although it can be grown in other regions. Its origins date back to the 11th and 12th centuries during the reign of Alfonso VI, King of León, Galicia and Castile.

After the reconquest of Toledo, the Duero area was repopulated with Astures, Vascones and Mozárabes. The grape was probably brought from Algaida, in North Africa via the Ruta de la Plata. The first vine plants of this variety in Spain were planted in Toro and the Tierra del Vino and Madrigal district of the Altas Torres (hence its alternative name of blanca de madrigal) and Rueda during the reign of Alfonso VI (11th – 12th century).

The nineteen-seventies saw a renaissance of the wines from Rueda when the Rioja bodega Marqués de Riscal decided to make white wines in Rueda. It was the first winery to install stainless steel vats with controls of temperature and the whole vinification process. They also promoted the cultivation of the Verdejo grape by paying a higher price to growers than for other varieties, so that year after year the amount of Verdejo under cultivation increased.

Following this revolution, on 12 January 1980, the Denominación de Origen Rueda was created by an order of the Ministry of Agriculture, making it the first wine D.O to be recognised in the Autonomous Community of Castilla y León, after several years working for the recognition and protection of its indigenous grape variety: Verdejo.

You can find out more about which cookies we are using or switch them off in settings.

This website uses cookies so that we can provide you with the best user experience possible. Cookie information is stored in your browser and performs functions such as recognising you when you return to our website and helping our team to understand which sections of the website you find most interesting and useful.

Strictly Necessary Cookie should be enabled at all times so that we can save your preferences for cookie settings.

This website uses Google Analytics to collect anonymous information such as the number of visitors to the site, and the most popular pages.

Please enable Strictly Necessary Cookies first so that we can save your preferences!